Background: About two-third of new drugs reveal low solubility in water due to which it becomes difficult for formulation scientists to develop oral solid dosage forms with a pharmaceutically acceptable range of therapeutic activity. In such cases, S-SMEEDS are the best carriers used universally for the delivery of hydrophobic drugs. SEDDS are also used but due to their limitations, SSMEDDS are used widely. These are the isotropic mixtures of oils, co-solvents, and surfactants. SSMEDDS are physically stable, easy to manufacture, easy to fill in gelatin capsules as well as improve the drug bioavailability by releasing the drug in the emulsion form into the gastrointestinal tract and enable smooth absorption of the drug through the intestinal lymphatic pathway.

Methods: We conducted a literature search related to our review, also employing the peer-reviewed research, and provided a conceptual framework. Standard tools were used for drawing the figures of the paper, and various search engines were used for literature exploration. In this review article, the author has discussed the importance of S-SMEDDS, selection criteria for excipients, pseudo-ternary diagram, mechanism of action of S-SMEDDS, solidification techniques used for S-SMEDDS, Characterization of SEDDS and S-SMEDDS including Stability Evaluation of both and future prospects have been concluded through recent findings on S-SMEDDS in Cancer as well as a neoteric patent on S-SMEDDS.

Results: Many research papers have been discussed in this review article, from which it was found that the ternary phase diagram is the most crucial part for developing the SMEDDS. From the various research findings, it was found that the excipient selection is the essential step which decides the strong therapeutic effect of the formulation. The significant outcome related to solid-SMEDDS is the less the globule size, the higher would be the bioavailability. The method in which adsorption of a solid carrier takes place is most widely used for the preparation of solid-SMEDDS. After reviewing many patents, it was observed that the solid-SMEDDS have a strong potential for targeting and treating different types of cancer due to their properties to enhance permeation and increase bioavailability.

Conclusion: S-SMEEDS are more acceptable pharmaceutically as compared to SEDDS due to their various advantages over SEDDS, such as stability issue is prevalent with SEDDS. A number of patent researchers have formulated S-SMEDDS of poorly soluble drugs and found S-SMEDDS as prospective for the delivery of hydrophobic drugs in the treatment of cancer. S-SMEEDS are increasingly grabbing attention, and the patentability on S-SMEDDS is unavoidable, which proves that S-SMEEDS are widely accepted carriers. These are used universally for the delivery of hydrophilic drugs and anticancer drugs as they release the drug to the gastrointestinal tract and enhance the systemic absorption. 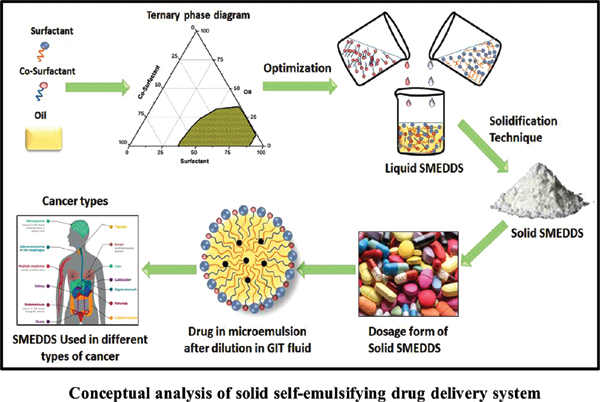