Aims: To use an agroindustrial waste (orange peels) as a source of polyphenols as a reducing medium for obtaining silver nanoparticles by greener method.

Background: Several techniques have been employed for AgNPs synthesis, nevertheless, most of them involve the use of toxic chemicals in the process. The use of fungi, bacteria, and plant extracts as subtracts for green synthesis is an ecofriendly alternative, although hypothetic, route for AgNPs large scale synthesis. In the case of plant extracts, it is believed that polyphenols are the biomolecules responsible for the reduction and stabilization of the Ag+ ions into AgNPs, being a sustainable and ecological option; polyphenols could be obtained from plant waste and agroindustrial subproducts.

Methods: The basic principle of silver nanoparticles synthesis is the interaction in a mixture of silver nitrate (source of Ag+ ions) and the orange peel extract (reducing and stabilizing agent) under certain conditions. Five treatments were carried out, evaluating several parameters during AgNPs synthesis such as pH, orange peel extract-silver nitrate ratio, time and conditions of incubation, irradiation of UV light, irradiation of microwave, and temperature.

Result: The synthesis of silver nanoparticles from an agroindustrial waste as the orange peel was successfully carried out and checked by visual evaluation, UV-Vis spectroscopy, and EDS analysis. The particle size was estimated between 42.82 nm to 151.75 nm, having a spherical and ovoid morphology.

Discussion: Through the analysis of several synthesis conditions, it has become possible to establish a suitable treatment to increase antibacterial yield and evaluate morphology and size traits in order to acquire the best conditions for a future industrial scale synthesis.

Conclusion: The orange peel aqueous extract resulted as a great source of polyphenols, allowing the successful synthesis of silver nanoparticles in mild conditions. Thus, obtained AgNPs revealed an increased antibacterial effect and potential against Gram-positive bacteria such as Staphyloccocus aureus. 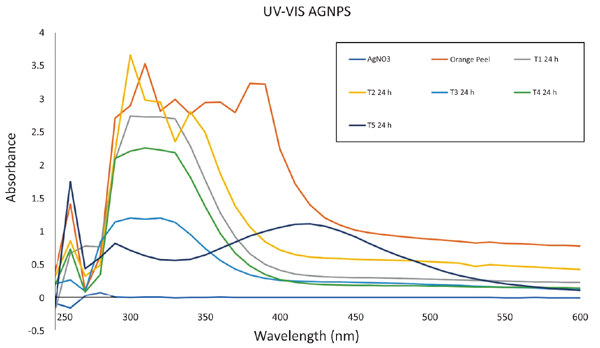