AND Gate Response in a Double Mesoscopic Ring


Background: Normal metal mesoscopic rings are being used in designing quantum logical gates due to the quantum interference effect and quantum confinement. This study focused on examining electronic transport through normal metal mesoscopic rings that have one dimension, and suggested how such rings can be employed to design nanoscale AND gate. A double mesoscopic ring was utilized for AND gate operation, every ring was threaded by magnetic flux, and the magnetic flux was considered as the key tuning parameter in the AND gate action. For a particular value of magnetic flux equal to the half of elementary flux-quantum, a logical AND gate operation was used depending on the applied gate voltages. Two gate voltages were externally applied to the lower arm of every ring, which acted as the two inputs of the AND gate. Few relevant patents to the designing and fabrication of quantum logical gates have been reviewed and cited.

Methods: All the calculations are based on the time-dependent Hamiltonian model, the steady state is used to obtain the transmission probability. Results: The transmission probability, the current and the noise power of current fluctuations were calculated in the weak-coupling and strong-coupling regimes. Conclusion: This study paved the way for the production of an electronic logic gate. 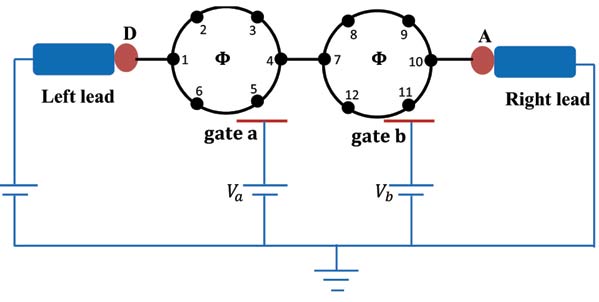